The Colors of Old Shanghai

SHANGHAI — In a neighborhood of alleyways tucked away along Jianguo Road in Shanghai, there is a new commercial development that deviates from the “tear down and rebuild” theme too often associated with the growth trajectory of arguably what is China’s most cosmopolitan city.

Though many vibrant coffee shops, art studios, bars, and restaurants fill the ground level of the Taikang Road area, these modern commercial establishments are accented by the traditional colors of living units on the second floor where residents still dry their clothes by clipping them on strings outside the windows.

“Hopefully this will be the model for Shanghai’s development in the future,” said Pan Tianshu, an anthropology professor at Fudan University who studies the development of Shanghai’s neighborhoods. Pan, who holds a doctorate from Harvard, contrasts the happenings at Taikang Road with that of Xintiandi, a similar neighborhood near the downtown area.

“At Xintiandi, they tore down the old buildings completely and used the old bricks to rebuild,” Pan said, adding that the resulting area is just an idea of what Old Shanghai looked like in the 1930s, leaving out the emotive qualities and storied characters that can only be fostered by decades of livelihood.

Taikang Road, however, has allowed old Shanghai to flourish even in the midst of rapid but inevitable changes.

Bagels are now served at Café Mojo, the front sign announces; and do not forget to try their Creamy Rosemary Pumpkin Soup during tea time, from two to six in the afternoon. Across the way, Café Maui promises authentic Hawaiian-American food, where a slice of cake and a cup of coffee only cost about five US dollars.

All the while, local residents—likely all retired—mingle with each other above, removed from the foreign wine tasters and young Chinese coffee drinkers living it up below. Unlike their air-conditioned commercial neighbors downstairs, the local residents leave their windows opened, letting the occasional Shanghai breeze circulate through the hot and humid summer day.

One can also browse through the prints of photographer Xuanmin Jin, who recently set up his studio to showcase work on modern Shanghai as well as a few images from the villages in Sichuan Province. Several corners down, at Jam Art Space, customers are encouraged to sit at the stools and easels, and paint with the acrylic colors provided. No artistic abilities required, but an urge to create and an ability to laugh are must-haves, stated the notice on the front door.

Just several feet from Jin’s art studio, though, two old women sat on short stools, hoping that the many visitors would buy some of the fruits and vegetables that they were selling on a piece of blue plastic sheet on the ground. Immediately above them hung several T-shirts and a pink underwear, waiting to dry. 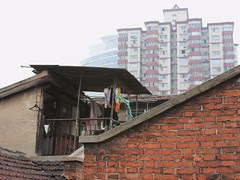 The Taikang Road area is one of many old shikumen neighborhoods that are distinctive to Old Shanghai. Meaning “stone gate” in Chinese, shikumens are collections of brick townhouses individually surrounded by stone brick walls, forming the narrow alleyways between them. As the hutong courtyard homes define the residential footprint of Beijing, shikumen does the same for Shanghai.

Since Deng Xiaoping opened up Shanghai to foreign investments and rapid economic development in 1990, however, many shikumens suffered the same fate as their hutong cousins in Beijing—torn down to make way for modern buildings and glitzy neighborhoods. That was the case with Xintiandi, when Hong Kong developer Vincent Lo injected his capital to “remake” Old Shanghai based on his own version of Shanghai nostalgia. Inevitably, along with the authentic Old Shanghai, gone too were the many existing residents around Xintiandi.

In recent years, however, there emerged a local movement calling for a more sensible way to develop; a way to grow with respect to the city’s established blueprint, unique character, and existing occupants.

At Taikang Road, the sub-district officer—an official who oversees the neighborhood’s affairs—voluntarily acted as a broker between the developers and the residents. The government worked with residents individually for mutually acceptable compensation packages, and the residents are required to keep such deals private. This is smart politics on the government’s part, since it reduced the likelihood that residents would form neighborhood resistance groups.

On the developers’ part, they agreed to keep the original buildings at Taikang Road. Though protests happened, the developers moved along on a much slower pace than in other areas, leaving many of the second-floor living units intact. Thus, many of the commercial outlets only occupy one floor; and those that extend to the second were probably able to strike successful deals with the units above.

“Taikang Road is an example of gentrifying a neighborhood and enabling development while mitigating some of the negative aspects of growth,” Professor Pan explained. “Many of the residents have been there for decades,” the professor continued, pointing out that these residents have grown with their communities and are attached to their ways of life. They are comfortable.

So what happens when the second floor generation dies off?

“Then the developers will probably have to refurbish their living units, tear down some walls to upgrade and enlarge them. Perhaps a young urban Shanghainese or an expat would move in,” Pan speculated. At the very least, the old building will still stand, preserving Shanghai’s unique urban landscape.

With this fact in mind, perhaps the picture in Xuanmin Jin’s studio are just pictures after all, that capture the glass and steel towers, but forget the colors of Old Shanghai that refuse to fade away.
Posted by Anka Lee at 9:36 AM